Well what a show! Thanks to my endless lists I had remembered to pack everything and I had timetables to run by, which I find makes my life a lot easier.

Wednesday went really well Knavesah Knight, was a superstar and I was delighted with his performance, he gained highest ride mark of the class and came a wonderful 2nd. I was so happy, what a clever boy! 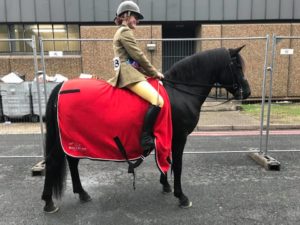 At lunchtime I went to the live zone to chat about showing native ponies, which I hope went well and I was very relieved not forget or mess up my words!

Rivervalley Teardrop was competing in the afternoon and her show was unbelievably amazing, she was so chilled out and performed exactly as I could have dreamt her to have done, it was thrilling when she was called forward into 7th place and top mare.

A quick turnaround and we got ready for the evening exercise with the four boys who were competing on the Thursday.

Colby Silver Sprite kicked off our day and as it was his first time at HOYS, I was hoping he would give a good account of himself and he was tremendous, he sparkled around the ring and was placed an outstanding 2nd! Words can’t describe how excited we were and what an achievement this was. Now we had two into the championship in the evening.

Thistledown San Siro is the baby of our team and this was also his first time at HOYS and he was a true little star; he executed the set show with great maturity and was placed an excellent 4th place, we were all so elated with him and the result was the icing on the cake.

The two dartmoors Newoak Springsteen and Furious were on last. Springteen went so well for his young jockey and they looked a picture together, sadly there was a mix up with the marks and although they awarded a placed rosette in the ring, they actually should have been placed just outside the top 10. We were thrilled with their performance regardless of the placings. Furious, is a showman and he was brilliant; his consistency over the years is outstanding and it was a huge thrill when he was called into 2nd place!

All the ponies were fantastic and I couldn’t have been prouder of them, they performed and smiled throughout. My team, as always, were wonderful to help me achieve such awesome results. When we came out the ring we had no time to rest, we had to get three ready for the championship and find some extra riders! I am very lucky to have friends who helped me out & all three ponies went so well in the main arena. It was a very proud moment to see them all and know that from my small team of six, half of them were in the championship with the top ponies in the country. 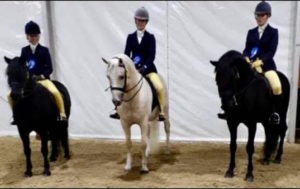 We ended off the season at the BSPS Heritage Champs, it’s always quite sad to know that this is the last big show of the year, some friends you won’t see until April next year and that the summer is officially over. We took four boys up there to see if we could qualify for the London International Horse show at Olympia in December. We have has some very near misses this year with three reserve champions.

Newoak Furious was first to try; he’s had three sections wins this year and narrowly missed out at Hickstead Derby Meeting, so it was very fitting and overwhelming when they called him forward and said that he had qualified for Olympia. This will be his third time competing at Olympia. I will ride him at Olympia for one last time as this will be my last ride on him, I was pretty emotional.

We had a group chat and decided to let Thistledown San Siro take his chance in his qualifier, he duly took note of his stable mate and also qualified for Olympia, he was the highest placed for his breed and it’s very exciting to have him competing there too, especially as he went so well at HOYS.

Ashley Rancher, had his New Forest Breed class the next day and despite the torrential rain, performed really well and won his qualifier for Olympia! It is thrilling as his owners bred him and this will be his first time at Olympia, he has had a great season and this will be the icing on the cake.

My own pony Colby Silver Sprite didn’t contest any Olympia qualifiers up at the show due to client’s ponies, so he took part in the RIHS 2019 qualifier instead. He was obviously happy to be out and performed beautifully went and won his class, before standing champion too. It was amazing to have had such a fantastic show and the ponies performed so well.

The end of the show was looming and many of us despite being cold, tired and wet just lingered on, not wanting to return as the realisation of the end of the season was creeping in, a bit like how you feel at the end of the school holidays. I managed to qualify for the overall supreme so I thought if I took part in that then it would delay the end for a bit longer. Colby Silver Sprite still fresh and sparkly danced his way around the ring and it was such a delight when he was called forward as Supreme of Show! It was an incredible way for us to end what has been a phenomenal show and season for us. I was speechless! 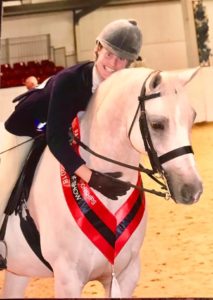 We are so lucky to have had a wonderful year, qualifying 11 for RIHS, 9 for HOYS & 3 for Olympia, as well as winning at RIHS, Royal Windsor, Bath & West, Pembroke, Lincolnshire, New Forest, Devon, Derbyshire & Staffordshire Festival, NPS, BSPS and lots of area shows. Bringing young ponies out and starting their careers, teaching young jockeys & seeing them progress and having fun. This year will be remembered for the above but also for the triple of trebles we’ve had!

No time to rest now though, off to get some of the breakers ready for the 2019 season and start obsessing about coats, work lists and Olympia!