Oh gosh that has come around quickly! It is really real now, so we are on to the final practises, preparation and getting everything into place.

All 3 boys have been out to an indoor school, just to make sure they remember what they are doing and have a relaxing time indoors before the big day. Their fitness is going well and the mild weather has really helped us as we have been able to canter in the fields and they have had lots of variety in their work with lots of hacking and jumping to keep them fresh and fit. 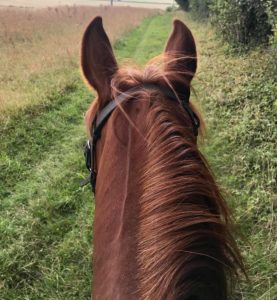 The weather is a daily obsession in my conversations as one of them we haven’t clipped, so the warm climate has helped but with all the rain we’ve had it still has been a case of rugs on… rugs off … as its not comfortable for them to be too hot.

They all go out daily as I feel that it is vital for them to be out, with their heads down eating some green grass. This does mean lots of wet rugs and muddy ponies to deal with!

Ashley Rancher has been out competing at Affiliated Dressage and gained his highest score of 69% in a novice test so that was really encouraging for him.

The farrier and physio are all booked to give them their final once over and a few other preparations are planned. I think its the calm before the storm.

We have started to get numnah’s, girths, rugs etc ready as they will all need to be loaded into a trunk/tack locker as the lorries are not parked near the stables at Olympia. Everything has to be transported off your lorry and placed outside your stable, so its a case of taking as little as you can but not forgetting what you need…. more lists needed I think!