The boys have all had a great week, we got together with their riders to have a little practise. We took two of them to a show on Saturday where it certainly reminded us that we were in the middle of December. It was absolutely freezing!

Newoak Furious and I won our class and Thistledown San Siro and Charlotte, his jockey for Olympia, were 2nd in their class. Furious was also Reserve Champion.

We were really pleased with them and although we need to tweek a few things before the big day I was pleased with them both. Ashley Rancher has got together with his rider and that went well too, she has already ridden him at a show before so hopefully they will go well together again on the day. 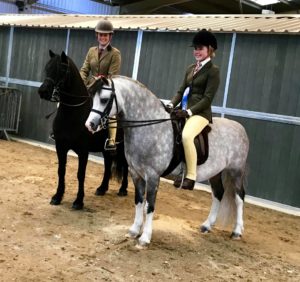 It has been a case of checking all the little details, farrier, physio, trimming them up and washing bandages, boots, numnahs and taking my jacket to the dry cleaners. I really hope I remember to pick it up this week!

We also had a check of all the equipment we need as it will have to be packed into a tack trunk and we really don’t want to be forgetting things.

We leave to go to Olympia on Sunday morning as its not too far to go, so the ponies will be turned out as normal on Saturday before having a wash and being got ready.

Olympia is a magical show to compete at and we are so excited to be competing. Fingers crossed!