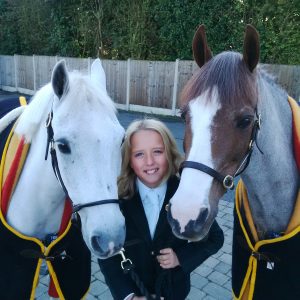 “I am proud to be an ambassador for Balanced Feeds as I believe I am giving my ponies the best feed there is. The Balanced Feeds range suits the different temperaments of my team, some are quite hot and sparky and one or two need a bit more fizz and energy. My ponies all love feed time, they bang the doors and never leave one bit, their coats are all shiny and gleaming and they all look amazing.”

My name is Claudia Moore, I am 12 years old. I have been riding for just over two years. I started riding 128cm ponies, my first pony was an WH Pony called Frankie, I learnt to walk, trot and canter on him. My first proper showjumping pony was ‘Snowball’, he got me started jumping unaffiliated and then affiliated in the 70cm category. Pringle and Peppino Il Grande were my ponies that I competed at the Royal International, Horse of the Year show, Olympia and Liverpool International on. I was placed 3rd at HOYS, 2nd and 5th at Olympia and 2nd at Liverpool International. I also competed on the U12 England 128cm Pony Team on four occasions, twice at the Welsh & English Home Pony Internationals.

I have now moved onto 138cm & 148cm ponies. I have My Bugsy Malone and Tullineaskey Feas Deas to ride in the138 pony classes. Bugsy is a 24 year old black gelding and he has “been there and done it” with all his previous riders. Dylan is a 15 year old bay gelding, who knows his job inside out. They are both  really special and I am aiming them at the Royal International Horse Show and the HOYS qualifiers.

My 148cm ponies are ‘Glamour’ a six year old bay mare that will jump the Newcomers and Foxhunter classes. “Delflip” a none year old bay mare, who is jumping the Winter RIHS JC qualifiers and who I am aiming at the Foxhunter second rounds.

Last but not least is “Elando”, he is a 12 year old bay gelding who won the individual gold medal at the Pony European Championships 2016. The plan is to get to know him this year and then aim for the Pony European Teams in the future.

My discipline is show Jumping.

I am currently feeding my ponies. Show Mix, N Hance and Competition Mix. Show Mix is great to feed, it helps keep condition on them, especially when they are travelling and showing so much, you can feed it without them getting buzzy. The N Hance also keeps good condition on them when jumping, but adds a little bit more spark to the quieter ones.

Completion Mix gives them lots of energy without getting them hot and stressed, it is really good when competing for a number of days.

My ponies love it and never leave a scrap.

My ponies look fantastic, they have condition, shine to the coats and a bright eye.

Balanced Feeds are great with the nutritional support and advice They have a feed to suit every horse or pony whether it be a top class competition pony or a family hack.