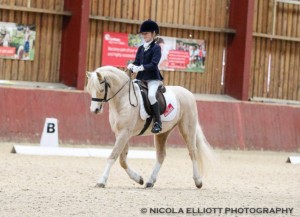 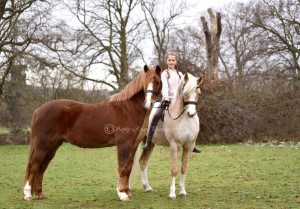 My name is Kate Hewson, I am 11 years old and I began riding 4 years ago. My first pony Newoak Jester a 12hh Dartmoor was loaned from Kingston Riding Centre. I began competing with him on the lead rein in 2014 winning the Sunshine Tour Lead Rein Pony Championship. Over that winter I began to ride off the lead Rein and showed him at small indoor affiliated shows, I also took him hunting but it was our first pony club dressage show that I got the dressage bug. I joined BYRDS as a fledgling rider in 2015

Newoak Jester (Bill) and I have been lucky to have represented Team Southern two years running at the Inter regional championships, this year finishing 2nd of all the fledgling riders, and at the under 25 championships in August we won the overall prelim 19 team test with a personal best score of 73.54 our team finishing 4th overall.

As well as having success in the dressage arena, I showed Bill riding Side Saddle at the major country shows including Royal Windsor and South of England culminating in winning the Native pony championship, Junior equitation best newcomer and overall best under 14 rider at the National Side Saddle Championships. Bill and I won many First Ridden classes over 2016 including Kent County and The Royal Bath and West but our greatest achievement was standing BSPS Pretty Polly Mini Mountain and Moorland Supreme Champion at the Royal International Horse Show.

For 2017 I have two Welsh section B ponies to compete on:-

I will be competing both ponies in mountain and moorland showing classes, my aim is to qualify for The Royal International and Horse of the Year Show.

In dressage I will be working towards competing at BD Novice level and I hope to be selected to represent Team Southern and England in the BD Home Internationals to be held in August in Scotland.

Harry and Flute are fed on Balanced Horse Feeds “Baseline Mix”. It is a high fibre but low calorie complete feed which maintains their show condition without making them too strong. Their coats are gleaming thanks to Balanced Horse Feeds Soya Oil. They also love their Balanced Carrot & Apple Tasty Treats too!

The team at Balanced Horse Feeds are always on hand to offer guidance on feeding my ponies and I am enormously grateful for the support and advice they have given me. I am very proud to be part of #teambalanced for 2017.