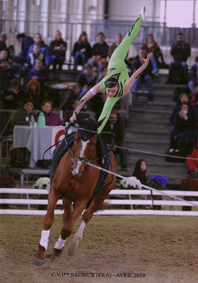 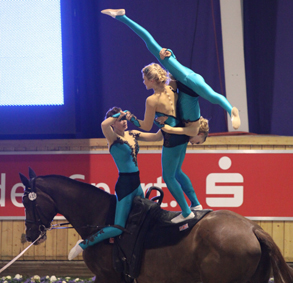 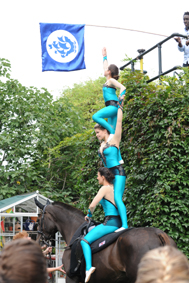 The English Vaulting squad, are based at Moulton College, Northamptonshire, and have four horses working at international level. In 2009 they were selected to represent Great Britain at the European Championships in Sweden the first time the English Squad managed to send a team, this is what the squad have been working towards ever since they were formed in 2000. The team finished a creditable 9th, they then went from strength to strength and were selected to represent great Britain at the world equestrian games in Kentucky, October 2010. They finished in 8th place out of 15 teams entered and were very satisfied. EVS finished 2010 as British Champions for the second year running and Go for Gold won the best horse trophy. The World Games in 2010 was a major undertaking for Go for Gold the Team horse, as she had never flown before.

“Go for Gold, at 17 years old took traveling to Kentucky 2010 in her stride and looked and behaved as bright as a button. A huge amount of this has to be attributed to Balanced Horse Feeds, the mare looks wonderful and is getting really positive comments from all the judges. She is also on Balanced joint and muscle booster to help keep her in tip-top condition. “