Hi, My name is Sam Roberts and over the next 4 weeks I will be giving you an insight into how we prepare our ponies for The London International Horse Show at Olympia in December.
I am so lucky to have qualified 3 ponies for Olympia this year. We qualified our ponies for the LeMieux BSPS Ridden Mountain and Moorland Final at the BSPS Heritage Championship show in October, so we’ve had a bit of time to relax before we start to get ready for the big day on the 23rd of December! Olympia is a very special show, it is right in the centre of London and being so unbelievably close to Christmas it has a fantastic atmosphere. Our class is on Sunday with the prelim judging in the morning session and the presentation of awards in the afternoon. So let me tell you a little bit about my boys. 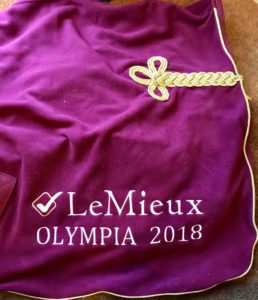 Newoak Furious is a Black Dartmoor gelding. He is owned by his breeders Mrs J & Miss J Newbery from the Newoak Stud in Devon. He has had a successful ridden career with highlights that include 1st at HOYS 2017, 2nd at HOYS 2018 & Best of Breed at Olympia in 2016 as well as being placed at Olympia before. This will be his third time at Olympia and I am really looking forward to riding him. Since qualifying for Olympia he has been at home having a little holiday but he is now clipped out and back here in work getting ready.
Thistledown San Siro is a Welsh Section A Gelding. He is owned by Mrs S Wilson. This has been his first full season under saddle and we have been delighted with him this year. He has continued to improve and he was 4th at HOYS and highest placed Welsh A when he qualified for Olympia. He has been home for a little holiday and also for his owner Hannah to get to know him and they have since been 1st & champion when they took him to NPS Area 29 whilst he has also had an outing with me finishing ridden Champion at SEWPCA. He likes lots of variety in his work and loves to hack out. He has now been clipped out so he doesn’t get too hot when we work him.
Ashley Rancher is a Chestnut New Forest gelding owned by his breeder Mr & Mrs Dibdin. I have had him since February this year so its been about getting to know him but his season has been brilliant being placed Supreme Ridden pony at the New Forest Enthusiasts Show & Reserve Supreme of show, Reserve Ridden Champion at the New Forest Breed Show and recently at British Dressage. He has stayed in work and will have his holiday after Olympia.
So the entries for the show have all been submitted and now we have to plan a schedule for them each over the next three weeks to help them perform and hopefully peak on the 23rd! We have received a lovely rug from the sponsors Lemieux so that is a really lovely gift from them and then most people take their rug and wear it at Olympia which is fun. The paperwork from Olympia has arrived so it really feels real now. 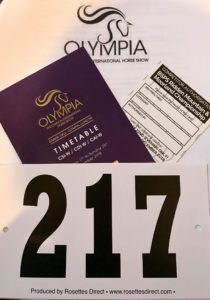 The countdown is on!