And the the countdown is on! The past week has flown by and we really are heading for HOYS soon. I think we would say this week has has been full of organisation.

Starting with lists! I actually love a list so I am very excited to start to write lists of everything. What I need to pack, what I need to pack in the lorry, list of jobs to do, timetables of work programs for the ponies.
Over the past week we’ve been busy washing. Endless amounts of washing! Although all the rugs and show gear gets washed after every show, at HOYS we need extra rugs, for if they sweat after evening exercise, extra bandages as white legs very easily become grubby, extra hoods, for in case they get damp in the rain, extra numnah’s as they will need clean ones for their class. The list goes on!

Dry cleaning for my Jackets as they’ve collected, polo, grass and general saliva throughout the year. They’re in need of a clean so they look respectable once again!

The lorry has had a spring clean – as I am sure you can imagine as the season has gone on we have collected endless amounts of ‘extra stuff’! This includes the likes of half a packet of baby wipes, empty chocolate wrappers, old back numbers, various qualification cards, old schedules, odd socks. You name it, my lorry probably has it. It is like a walking tack shop, DIY Store and charity shop of various clothing items!

I have also had to get all my tack organised – running repairs and alterations to my local saddler for adjustments and then we re-check all the tack fits, girths and everything else is ready, so that the tack can be cleaned next weekend ready for the big day.

Feed orders have been done so both equine and humans have supplies of their favourite feed and treats! Plenty of Balanced Horse Feeds will be delivered next week for the ponies, in time to be packed. As well as large amount of polo’s and chocolate for me!

The ponies have all worked well over the past weeks and have seen the physio to make sure they’re in peak condition. The coats are ok, just about holding for now, but its a yo yo situation of rugs on/rugs off. Some of them are off to a show on Saturday and others have an outing planned next week.

At HOYS on Wednesday I have been asked to talk at the ‘Live Zone’ HOYS are holding called ‘Lets talk showing’. This is a talk with professional show riders where we give a talk about showing ponies and tips with a Q & A session at the end. It is being held at the Live Zone in the shopping village at 1pm for 45 mins. I like to ride ponies more than talking into a microphone but I am sure it will be fun, but please come along I might need some support! 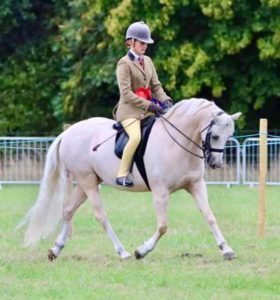